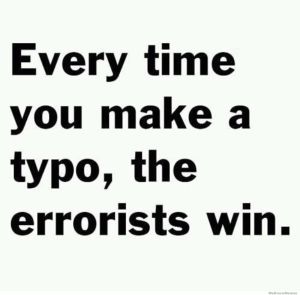 We have a rule in our offices at Lantern Books that no copies of a book newly arrived from the printers are to be scanned for typos, verbal infelicities, or solecisms. It’s hard to do: the eye roves over the page like a klieg-light, casting into sharp relief the typefaces chosen, the leading and kerning of letters and lines on the page, the running-head format, the dimensions of the book, the thickness of the paper, the margins, and so on. We’ve poured our hearts (and not an inconsiderable amount of money) into the book, and it’s beyond disheartening to be confronted with mistakes that somehow bypassed the author, editor, copyeditor, typesetter, and proofreader.

After fourteen days, however, we can view the errors with more equanimity than despair; and exasperation and self-loathing have been replaced by a shrug of the shoulders and steely determination not to do it again. Thankfully, technology has helped us experience fewer unwelcome surprises. Not only can we do a dummy run with one or more copies of the book, just so that we can get the three-dimensional item in our hands before committing ourselves more fully to print, but the actual print run can be a matter of only a few copies, allowing changes to be made quickly, with relatively little expense, and with relatively few tarnished copies out there in the world.

I still think the two-week rule needs to be applied—and not just for publishers. An author recently told me that she’d sent her mother a copy of a book over which she’d labored mightily for many years, only for her mother to reply immediately that she’d found three errors—and that was just for starters. Of course, it is the ordained role of parents everywhere to remind their children that, no matter how much they may feel they have accomplished, they’ll always be in the wrong. So, authors: make sure you tell your readers (and especially your supposedly nearest and dearest) that for fourteen days you want nothing but unconditional love and support. After that, one’s fragile heart might be strong enough for the uncomfortable truth.

I am the executive director of the Culture & Animals Foundation, the co-founder of Lantern Publishing & Media, and the author, editor, and ghostwriter of several works of fiction and non-fiction. I live in Brooklyn, New York.
View all posts by martinrowe →
This entry was posted in Editing—Publishing—Writing, Publishing. Bookmark the permalink.
Vegan America Project

A Vision for Agriculture and the Economy in the Anthropocene